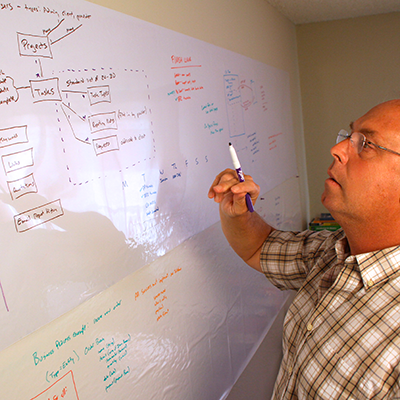 While working as General Manager at Advanced Audio in the mid to late 90's, I had the idea that we should jump on the bandwagon before most and get a website. Being in a highly technical industry, this seemed like a great marketing fit. I pitched it to the owner and he enthusiastically agreed "Wow that sounds great! When can you have it done?" That moment marked the beginning of a transition from Pro Audio, where I was well known around the Post Production departments of the major movie studios as a digital envangelist and general source of current tech knowledge, to a new career behind a keyboard.

Since that career change, I have worked in Enterprise environments such as Payment Processing, Securities Exchange and Healthcare, as well as worked long stretches freelance and contract. The free spirit in me loves working at home, and the flexibility that comes with it. The Mega Geek in me loves the Enterprise, that is where they keep the coolest toys!

My experience is focused largely on ColdFusion. Unlike many programmers that work mostly on web facing properties, my interests are much more back end oriented than front end. While many have spent time mastering countless JS frameworks, I spent that time learning more about IIS, Windows Server, SQL Server, and especially SQL Server Performance tuning. There is something deeply satisfying about taking a query that requires several minutes to run and tuning it to run in seconds instead. If I wasn't a programmer, I would be a Server/Network admin, and actually do pick up a fair bit of work managing web and SQL servers.

When not writing code or working on servers, I enjoy bodyboarding, mixing live sound and spending time with my wife.

A few files from an extensive Yodlee integration, done in an SOA style.